Marvin Hamlisch at The Palace 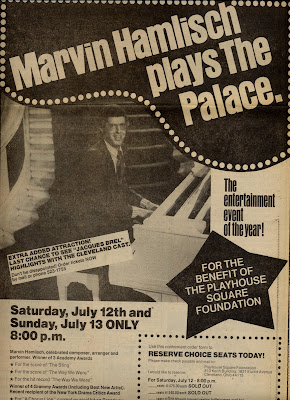 The first “real” show at the Palace was Marvin Hamlisch on Saturday and Sunday July 12th & 13th, 1975. A few days earlier the Palace was swarmed with stagehands preparing the theatre for the first live stage show there in years, many of them were ecstatic at seeing names of fathers and grandfathers chalked up in the flies from years earlier. At the time I was living in the Cinerama booth on the main floor and was displaced for the weekend, as a result I relocated to the main projection room at the top of the balcony. Since the fire escapes on the East 17th Street side of the balcony were removed , only limited seating was allowed upstairs, mostly in the loges. Plus with no real theatre seats on the main floor, chairs were used, this limited the crowd to around 2,000. The vibe leading up to the show was overwhelmingly upbeat and that continued throughout the weekend.

I watched both shows from the projection room at the top of the balcony. The show opened with the Brel cast performing a few selections from the hit show that had recently closed. If I remember correctly, Hamlisch hit the stage and said, “I wrote this when I was 15” and launched into a version of Sunshine, Lollypops, and Rainbows, much to the delight of the crowd. He played selections from The Sting, and A Chorus Line, saying hopefully in the future shows lIke a Chorus Line would appear in the Palace.He showed scenes from The Swimmer and had the audience choose the tryp of music for the scene, fast, slow, etc. I don’t remember wht he closed with but both nights were an overwhelming success.

The top half of Mary Strassmeyer's column in the Plain Dealer, Monday, July 14th, 1975. 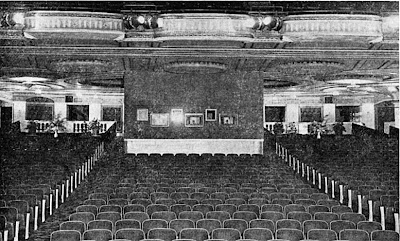 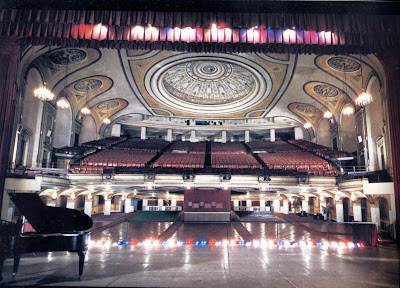 This is what the Palace auditorium looked like in 1975.
Photo by William Gesten/Foto Arts Inc.
Posted by Frank Dutton at 8:27 AM