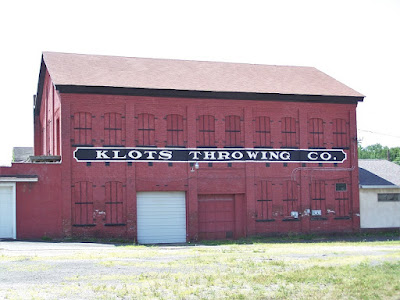 The Klots Throwing Company building on Dundaff Street in Carbondale, a few weeks ago. This is next to the D&H yard along Enterprise Boulevard. In 1895, H.D. Klots opened his first textile mill in Carbondale, expanding operations to Scranton, Archbald, Forest City, and Moosic by 1916.The company, like many others, struggled through the depression, and was reorganized, in 1937, as the General Textile Mills Corporation. By World War Two the company was using synthetic fabrics to make parachutes for the Army. Later the company began making helmets, their "Rioter Helmet" was a favorite of many police departments in the 1960's. In 1958 the name was changed to Gentex Corporation.